Can Eating A Ketogenic Diet Change Our Microbiome?

The ketogenic diet is growing in popularity around the world year after year.  The diet was originally used to treat epilepsy in the 1920’s, but since then it has been shown to be effective for weight loss and improving health conditions beyond epilepsy such as depression, systemic inflammation, autism spectrum disorder, metabolic syndrome, and cancer. (4,5) If you want an in-depth and easy to follow introduction to the ketogenic diet, you can join our resource center to access our coverage of the ketogenic diet.

Typically, carbohydrate consumption is limited to somewhere in between 15g to 50g per day on a ketogenic diet. Carbohydrates consumption is drastically reduced on a ketogenic diet to shift the way your body uses energy. When you eat carbohydrates – does not matter if they are simple carbs or complex carbs — your body converts them into glucose. Glucose is the primary fuel your body uses for energy. What happens in the body when it runs out of glucose?

A ketogenic diet shifts your body away from using glucose for energy to using ketone bodies for energy. Ketone bodies are made from fat primarily in the liver via ketogenesis. This is why the ketogenic is great for fat loss. The body is creating energy directly from breaking down fat instead of relying on carbohydrate consumption for energy.

If you want to learn more about the ketogenic diet, and how it can help improve your health and fertility, sign up at our resource center. Now we will focus on the microbiome and how it is influenced by eating a ketogenic diet.

How Does The Microbiome Influence Health And Behavior?

The gut microbiome is a collection of microorganisms within your digestive system that begins right when food enters your body and ends when food leaves your body. Microorganisms within your digestive system help metabolize food and produce several important products for the body. Did you know that ~95% of the serotonin production with the human body is made by bacteria living in the digestive system? (1) Or that bacteria have a significant influence on the activity of brown fat within the body? (2) The microbiome influences a wide variety of other bodily functions such as social behavior, gene expression, neurotransmitter metabolism, and several neurophysiological processes. (3)

There is a lot of interesting research going on around the world looking into the connection between the gut microbiome and human health. We will be writing blogs covering this research in the future. But for now, we will finally move onto how the microbiome is influenced by the ketogenic diet.

When You Eat A Ketogenic Diet, Do Changes Occur In The Microbiome? 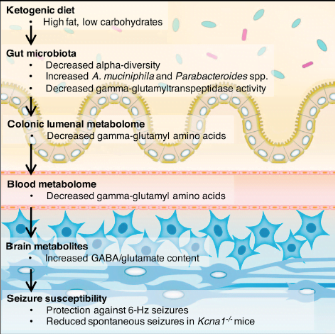 What Do Changes In The Microbiome From Eating A Ketogenic Diet Mean For You?

This study was the first of its kind to make a significant connection between the gut microbiota, ketogenic diet, and anti-seizure effects. (6) Researchers found a clear link between changes in the gut microbiome induced through the ketogenic diet that result in an increased GABA to glutamate ratio. A higher GABA/glutamate ratio is associated with the anti-seizure effects shown in the study.

Another interesting finding was how eating a ketogenic diet lowered alpha diversity. Alpha diversity became lower because of A.muciniphila and Parabacteroides gaining a higher percentage of total bacteria within the microbiome. In previous studies, A.muciniphila, and Parabacteroides were associated with less fat gain, less inflammation in fat tissues, higher levels of endocannabinoids, better insulin resistance, and more ketosis. (7,8)

A Bit More On GABA

The higher GABA/glutamate ratio is thought to be one of the major changes occurring in response to eating a ketogenic diet that produces anti-seizure effects. GABA is a neurotransmitter that calms the body. Higher GABA to glutamate ratios has been shown to alleviate depression, reduce anxiety levels, lessen insomnia, reduce the severity of PMS symptoms, increase growth hormone, improve focus, and reduce systemic inflammation. (10,11,12,13,14,15)

Below is a summary of what you need to know about how the ketogenic diet alters the gut microbiome: