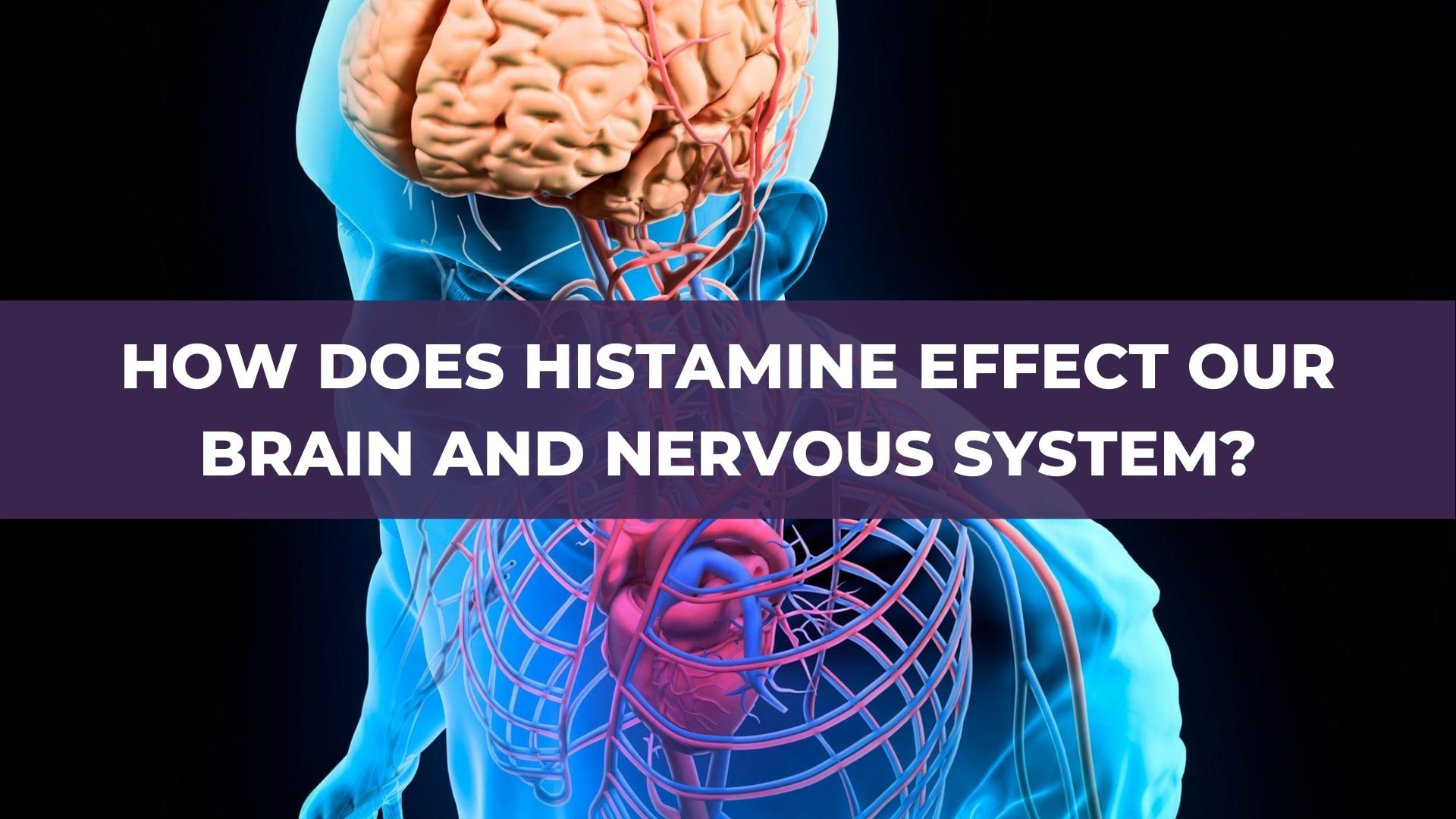 How does histamine effect our brain and nervous system?

Histamine is a natural substance produced by the human body and is a substance with many important functions. Histamine was first isolated in 1907 by Windaus and Vogt, but research is ongoing in both health and disease since its initial description more than a hundred years ago.1

Histamine was considered an amine that was only part of the local immune response in the inflammation process (immunomodulation). However, it can cause local vasodilation, stimulation of gastric secretion, smooth muscle contraction (as bronchial muscle), and nerve stimulation.

In fact, Kwiatkowski at 1941 and White at 1959 demonstrated its presence and formation in the brain. Histamine recently has been considered an endogenous chemical that acts as messenger between cells belonging to the nervous system also known as a neurotransmitter.2

How Histamine exerts its effect on the human body

According to Per Brodal’s book named “The Central Nervous System” and Benarroch Eduardo’s publication named “Histamine in the SNC, Multiple functions and potential neurologic implications”, histamine exerts its effects by binding to G protein-coupled histamine receptors.

There exist four varieties of histamine receptors named H1, H2, H3, and H4. The H1, H2, and H3 receptors are widely distributed around all the central nervous system. However, H4 receptors are mainly found in peripheral tissues, such as the bone marrow and white blood cells, and to a lesser amount, in the colon, liver, lung, small intestine, spleen, testes, thymus, tonsils, and trachea.3, 4

The H1 receptors can regulate neuronal excitation in most brain regions (brain stem, hypothalamus, thalamus, amygdala, septum, hippocampus, olfactory bulb, and cortex). This kind of receptor activates the K+ channels through an increase of calcium ion (Ca2+) concentration which decreases the neuronal cells excitability and inhibit the cells firing in hippocampal pyramidal neurons. Classic antihistamines, and some antidepressants or antipsychotics perform their function through H1R, with the well-known side-effect of sedation.2

On the other hand, H2 receptors are mainly found in the basal ganglia, amygdala, hippocampus, and cortex. H1R are also found in some of these locations, which leads to synergistic interactions between these receptors types. H2R performs its function through adensyl cyclase and the increase of intracellular cAMP, which later activates the protein kinase A (PKA) and the transcription factor CREB. All of them are substances capable of regulating the neuronal physiology and plasticity. In mice, a deficiency in H2R function produces selective cognitive deficits, impairment in hippocampal LTP, and abnormalities in nociception.2, 4

Likewise, H3 receptor acts as a presynaptic heteroreceptor and releases a variety of other transmitters like biogenic amines, acetylcholine, glutamate, GABA, and peptidergic systems. The loss of its function in mice is associated with behavioral state abnormalities (such as hyperphagia, late-onset obesity, increased insulin and leptin levels).2

What are the effects of Histamine in the central nervous system?

According to the location of its receptors in the central nervous system, histamine can trigger different responses in the human body including:

– Hypothalamus, glial cells, and blood vessels: Homeostatic processes (such as food and water intake, hormones secretion, temperature regulation, among others).

The histaminergic system in the human brain is really extensive (approximately 64,000 neurons) and it is located between the mammillary bodies and the chiasma opticum, in other words, around the tuberomammillary nucleus in the posterior hypothalamus.

How histaminergic signals are transmitted in the central nervous system?

In the human body, histamine signals are sent from the posterior hypothalamus to the forebrain, brainstem, and spinal cord by direct action and through activation of other neurotransmitters.The histamine release is non-synaptic, which means that a significant number of neuromodulators must be activated to produce the release and help with the effect of histamine.This is considered the “slow” transmission mechanisms because second messengers are needed for the entire process.7,8

Histamine is also able to carry out a fast neurotransmission in the nervous system. When the tuberomammillary cells are excited they can evoke a fast and excitatory response in the supraoptic neurons mediated by histamine, and these effects can be blocked with the use of histamine antagonists.8

What is the relationship between histamine and the pineal gland?

What other studies have concluded about histamine

According to other researches, histamine could be involved in the transmission and processing of visual signals in the brain, especially in mammals, in whom the information about light and dark cycle is obtained through the eyes and it is processed in the retinohypothalamic tract to later be sent to the SCN.11

What Nervous system diseases are related to alterations of histamine?

Parkinson’s disease (PD) and schizophrenia (SCZ) are frequent central nervous disorders with no clear etiology, but currently they have been related to elevated levels of histamine and the Thr105Ile substitution in the histamine N-methyltransferase gene (HNMT-Thr105Ile) involved in histamine degradation.12

The result of the study named “Association of Histamine N-Methyltransferase Thr105Ile Polymorphism with Parkinson’s Disease and Schizophrenia in Han Chinese: A Case-Control Study” suggest that the HNMT-Thr105Ile locus is associated with the risk of both PD and SCZ in Han Chinese while the minor Ile105 allele conferring a protective effect against both disorders.

Other Conditions associated with Histamine

Histamine is being studied more and more each day. Research in the last several years has increased the knowledge about histamine and its role in several neurodegenerative diseases, such as multiple sclerosis, Alzheimer’s disease, and Wernicke’s encephalopathy.

Many affectors affect brain histamine levels and we are learning more and more each day.

Do you understand the nuances of prescribing methylation supplements? Do you see MTHFR polymorphisms and automatically give methyl folate? Or do you avoid giving methyl folate because your patients react? If you are doing either of these things then you are not correctly prescribing. Learn the basics of prescribing of key nutrients like Vitamin B12, Folate, B6, Trimethylglycine and more.

*You must be signed in to the Institute Portal to watch this video for free. Not an Institute Member? Sign up here to get complimentary access to this video and all our monthly deep dives and practitioner trainings.