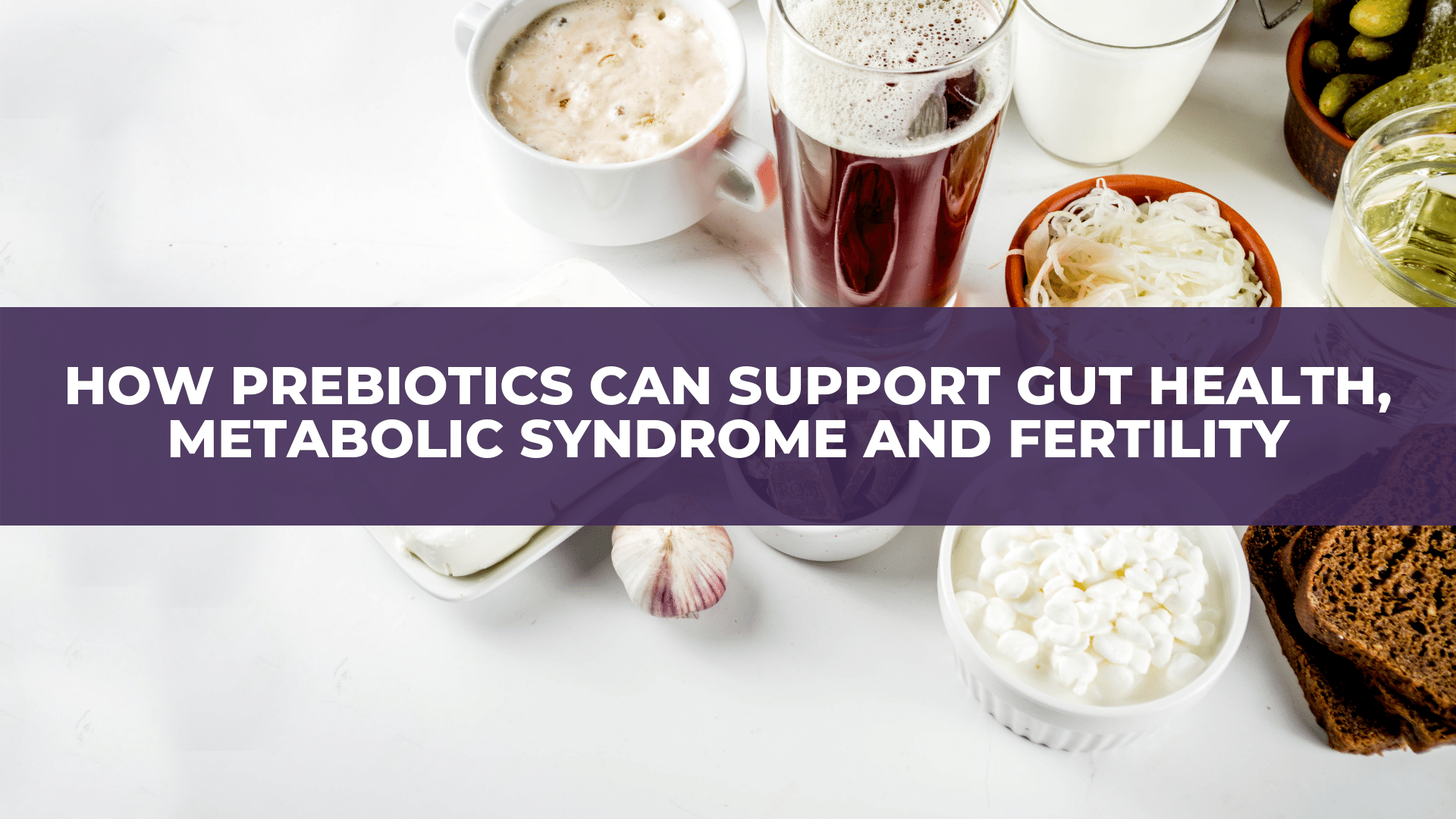 In natural medicine, it’s a widely accepted notion that having a healthy gut leads to better health overall.

There is growing evidence of the crucial role the microbiome, also known as our community of good gut bacteria, plays in optimal gut health. As a result, probiotics have been a huge focus of attention, and rightfully so, however another important and sometimes overlooked facet to a healthy gut and microbiome is prebiotics.

Put simply, prebiotics help to feed the beneficial bacteria in our microbiome and thus make them grow more robust and abundant. Not to be confused with probiotics, which are the beneficial substances that are often formed in foods as a result of fermentation.

Prebiotics come from the indigestible components of the fibre-rich foods we eat. These fibrous food particles provide the perfect food and fuel to our beneficial colonic bacteria helping to exponentially enhance their growth and division, meaning they help to grow the population of your beneficial organisms. It has been reported that there can be up to 1010–1012 live microorganisms per gram living within the human colon.[1]

Prebiotic substances can include cellulose (from plants/vegetables), lignin, psyllium, resistant starch and many hemicelluloses. For those who have a diet rich in fruit and vegetable plant matter, they will ensure plenty of prebiotic goodness to feed and grow healthy gut bacteria and other beneficial substances like short chain fatty acids. If however, their diet is low in fibre, they may benefit from an added boost of easy-to-consume fibre as a supplement, like partially hydrolysed guar gum.

What is partially hydrolysed guar gum?

Partially hydrolysed guar gum – also known as PHGG, is a special type of fibre that comes from the guar bean plant. You might recognise the name guar gum as a common ingredient found in foods as a thickener, however PHGG is not to be confused with food grade guar gum, as it has been enzymatically changed to help it yield special prebiotic properties.

Due to its unique properties, PHGG can support not only your gut microbiome but your overall health and wellbeing.

How can we benefit from PHGG?

The fundamental building blocks of our body and our immune system depend upon how well we digest, metabolise and absorb the food (nutrients) we eat and additionally, our ability to effectively excrete metabolic wastes (toxins) from the body. All of these important functions are conditional on a well-functioning gut.

Fibre and its prebiotic benefits can have direct impacts upon gut health, which have a cascade effect of initiating other positive and health promoting benefits to other systems of the body. The gut is a key interface with our immune and nervous system, in addition to its critical role in nutrient absorption and waste excretion. Evidence has demonstrated PHGG can be of benefit in a range of gut conditions, but also in conditions such as metabolic syndrome(s) and even fertility.

Irritable Bowel Syndrome (IBS) is one of the most prevalent functional gastrointestinal disorders worldwide that may affect up to 10-15% of people.[2]

IBS presents with various symptoms ranging from chronic diarrhoea, constipation, abdominal cramps, bloating and flatulence. The aetiology and underlying pathogenesis of IBS is still not very well understood. However, one of the factors that can contribute to IBS is abnormalities in the gut microbiota.

PHGG can be a great intervention for people with IBS as it can help to restore the beneficial gut flora that is important for the production of essential SCFAs for gut health, butyrate, acetate and propionate.  A study by Niv et al. (2016) revealed that just 6 grams per day of PHGG taken for 18 weeks, significantly reduced IBS symptoms, and was specifically helpful for flatulence and bloating. Furthermore, the study showed that 4 weeks after ceasing taking PHGG, IBS symptoms often presented again.[3]

Small Intestinal Bacteria Overgrowth (SIBO) is a condition that is becoming increasingly more common. SIBO presents with symptoms of diarrhoea, bloating, flatulence and abdominal pain and is due to an abnormal number of bacteria in the small intestine.

It is estimated that one in six Australian couples have trouble conceiving [5] and will require Assisted Reproductive Therapy (ART). Could something as simple as boosting gut health with the assistance of a prebiotic fibre help to improve a couple’s chances of conceiving?

In a second stage of the study, the infertile patient group was given 10 g/ day of PHGG supplementation whilst receiving embryo transfer ART. The study discovered that supplementation with PHGG not only helped improve gut dysbiosis, but also aided the success of achieving a successful pregnancy in females previously struggling with infertility (58.3%; a 7 out of 12 success rate).  The research noted that predictive factors for pregnancy were characterised by a decrease in the abundance of Paraprevotella and Blautia species, and an increase in the abundance of Bifidobacterium species.[6]

Metabolic syndromes such as type 2 diabetes, are becoming increasingly more prevalent amongst Australians. An estimated 1.2 million Australian adults had type 2 diabetes in 2017-18 based on self- reported data [7]. Type 2 diabetes is diagnosed by an insufficient uptake of glucose by cells, due to poor insulin sensitivity.

A study conducted by Dall’ Alba et al. (2013) investigated the effect of PHGG supplementation on patients with type 2 diabetes.[8] Participants in the study were given 10 g/ day of PHGG for six weeks and assessed for the outcome. It was found that taking PHGG resulted in improvement in a number of critical biomarkers for diabetes. Particularly, waist circumference, glycated haemoglobin, urinary albumin excretion and serum trans- fatty acids, suggesting that PHGG could have a positive effect on the wellbeing of diabetic and metabolic syndrome patients.

Where to find PHGG?

The MTHFR Support shop has a great range of natural health supplements. Recently, the shop has added a new organic PHGG that is a 100% partially hydrolysed premium guar gum which contains no fillers and no artificial colours, flavours, sweeteners or preservatives.

MTHFR Support Organic PHGG does not swell in water like many other fibre supplements can and is therefore less viscous, minimising the chance of uncomfortable side effects that may be associated with other fibres, including guar gum itself.

How safe is PHGG?

Adverse side effects are extremely rare for PHGG and it has been shown to be well tolerated. It’s important to remember that when increasing one’s fibre intake that it is possible for bloating, flatulence or mild gastrointestinal distress to occur in the beginning. This can be greatly minimised by introducing the fibre slowly at a low dose and incrementally increasing it over a series of days or weeks to give the body the opportunity to adapt to the increased fibre. Whenever fibre is boosted in the diet, it is also important to ensure adequate water consumption, and so this would need to be increased accordingly.

Always check in with your health professional before adding new supplementation to your regime, particularly when taking prescribed medications.