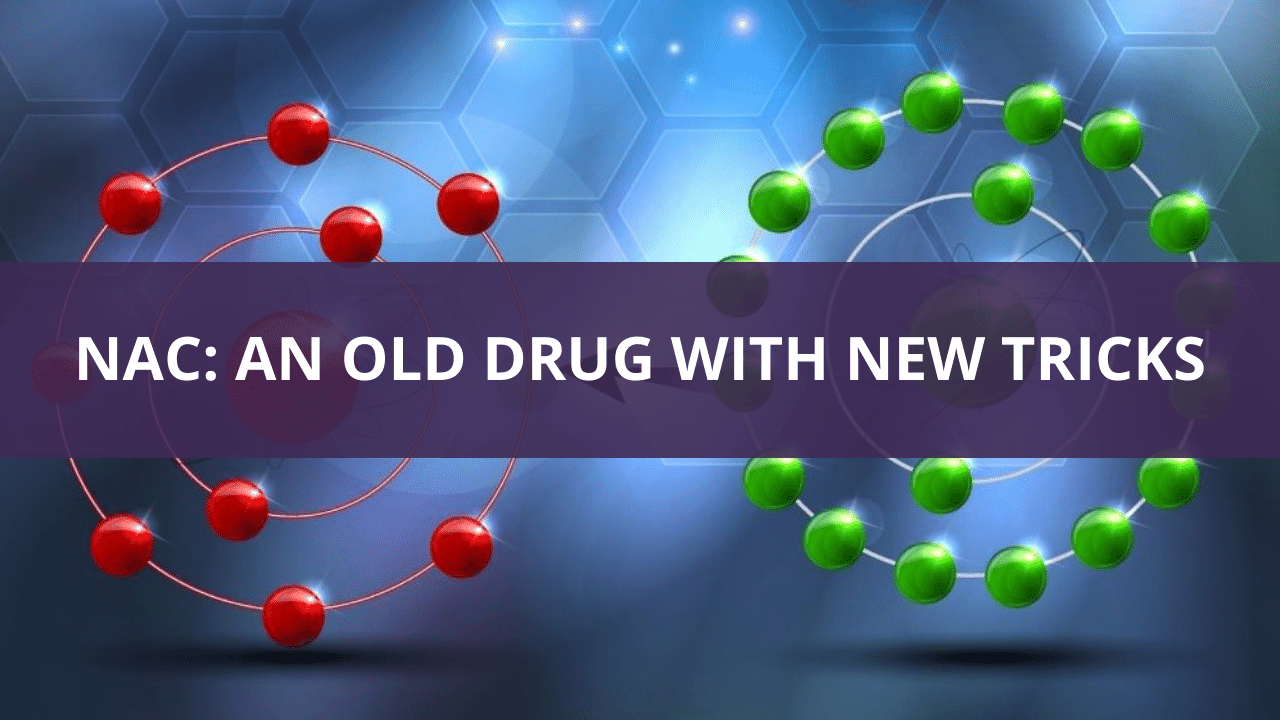 'Antioxidant' is indeed the buzzword of the decade. A google search of the term brings up over 130 million results. We're sure you've heard of antioxidant supplements and lists of top 10 foods containing antioxidants. But what does 'antioxidant' really mean?

Oxidative stress is associated with many diseases

Today's post will explore N-acetylcysteine (NAC) and its significant antioxidant benefits across different diseases. Could adding NAC on top of current treatment be useful? Follow us below for an in-depth analysis.

✤ Getting a knack for NAC

N-acetylcysteine, or NAC for short, is a tried-and-tested drug from the 60s that is the mainstay of therapy in acetaminophen (paracetamol) overdose. Paracetamol overwhelms the liver's natural detoxification system, while NAC rescues the liver by acting as a glutathione (GSH) precursor. GSH is a crucial antioxidant molecule in the body. By replenishing GSH reserves in the liver, more toxic paracetamol metabolites are neutralised. NAC also directly scavenges reactive oxidant species (ROS) – these are the harmful free radicals that cause oxidative stress. (2) Figure 1. The pathophysiology behind acetaminophen-associated liver injury and the role of N-acetylcystine. Image from (3)

Pharmacologically, NAC is a metabolite of the amino acid cysteine. It is available in oral, intravenous, and inhaled forms. Besides being a potent antioxidant, NAC is also historically used to 'dissolve' thick mucus in lung diseases such as cystic fibrosis and chronic obstructive pulmonary disease (COPD).

In the early 21st century, NAC began to emerge as a potential anti-inflammatory agent. NAC appeared to suppress the 'master controller' of inflammation in the body – the nuclear factor kappa beta (NF-κB) pathway (4). The NF-κB pathway is implicated in diseases like cancer, inflammatory bowel disease, arthritis, gastritis, and asthma, to name a few (5).

NAC may seem like a wonder drug at this point, given its antioxidant and anti-inflammatory abilities. However, as we'll soon discuss, different NAC formulations and dosing regimens impart different effects in various diseases (some promising, some not so much). Read on to get a good picture of how NAC may help.

Clinical studies on NAC treatment in individuals with metabolic syndrome (a collection of disorders that includes insulin resistance, high cholesterol, obesity, and high blood pressure) found that long-term NAC treatment (1 up to 12 months, at doses of 600mg – 1000mg daily) improved liver function (6). Studies on animal fatty liver models suggest that NAC may work by stopping fat accumulation in the liver, as well as dampening oxidative stress and inflammation (6).

Besides, a meta-analysis and systematic review of 7 studies (883 patients) found that NAC treatment in those with non-paracetamol-related liver failure effectively improved overall survival and shortened duration of hospitalisation (7).

NAC seems to have both direct and indirect benefits on our hearts. Four weeks of oral NAC in a study of 80 participants resulted in lower homocysteine levels and decreased blood pressures (8). High homocysteine level is a known risk factor for increasing the risk of heart disease, blood clots, and pregnancy complications in pregnant women (9).

The NACIAM trial, a study carried out in Adelaide, revealed that early initiation of high-dose intravenous NAC in patients with myocardial infarctions (in addition to regular treatment protocols) results in significantly smaller sizes of dead heart tissue (10).

Similar effects were also seen in women with polycystic ovarian syndrome (PCOS), a disease caused by hormonal imbalances. Women with PCOS usually struggle with infertility. A large systematic review that examined 8 studies (910 women) found that NAC treatment (either alone or in combination with metformin – a diabetic drug commonly used in PCOS) notably boosted pregnancy success rates (13). Higher ovulation and pregnancy rates were also noted in those treated with NAC and either letrozole or clomiphene citrate, two other medications used to improve fertility in PCOS (14, 15).

✤ NAC and the brain

Perhaps the most unexpected area where NAC has been trialed is in the realm of brain diseases. The stuff that our brains are made of are notoriously complex and work in yet-to-be-fully understood ways. If our brain cells were the cables, then neurotransmitters (chemical messengers that relay information from one brain cell to another) were the electricity. Because everything works precisely, mere neurotransmitter imbalances give rise to mental health conditions such as schizophrenia and depression. Specific genetic mutations that cause abnormal protein accumulation cause neurodegenerative diseases like Alzheimer's and Parkinson's – both of which are common types of dementias that arise from certain parts of the brain decaying faster than others.

A strong example of NAC's potential benefits is in a study of soldiers who experienced mild traumatic brain injury (TBI) due to blasts. Soldiers who received high dose early NAC treatment (between 3-4g daily for a week) were 3.6 times more likely to have resolved symptoms of hearing loss, headache, confusion, memory loss, and poor sleep (17).

The effects of NAC on mental health disorders are a mixed bag. For example, NAC supplements in those with obsessive-compulsive disorder yielded minor results in adults but had some in children (18, 19). Some studies showed that high-dose NAC (2g for 3 months) improved depression symptoms, while others reported that NAC only showed promise in treating depressive episodes in bipolar mood disorder (20, 21).

Despite modern medicine having grown by leaps and bounds in the last decade, neurological diseases remain an area where current therapy remains suboptimal. Inconsistencies across different mental health conditions reflect how little we really understand about brain disorders. More studies dissecting the optimal dose of NAC and how it helps heal the brain are needed more than ever.

NAC is a well-known mucolytic and is commonly used in its oral or inhaled form by patients with lung disease to help break up thick sputum. Moreover, cystic fibrosis, idiopathic pulmonary fibrosis, and COPD also have elevated oxidative stress and inflammation levels in common, both of which could be attenuated with NAC (23).

This brings us to COVID-19 – could the infamous 'cytokine storm' that wreaks havoc be dampened with NAC? The COVID-19 cytokine storm is a feared complication that causes the body to go into a vicious, inflammatory state, causing multiorgan failure and eventually death (24). With its previous success in preventing the severity and duration of influenza (the common cold), NAC was scrutinized in the context of COVID-19 (24).

There are 3 ways that NAC may help in COVID-19

There are 3 ways that NAC may help in COVID-19. Firstly, NAC could stop viral replication. Secondly, it could dampen the immune response. Thirdly, the COVID-19 cytokine storm severely depletes glutathione stores, allowing massive amounts of reactive oxygen species to collect. As we pointed out earlier, NAC is a rich source of GSH, thus restoring the oxidative imbalance in COVID-19 (25).

Another feature of COVID-19 infections is severe acute respiratory distress syndrome (ARDS), a condition also marked by significant oxidative stress. A meta-analysis that included five randomized controlled trials found that NAC reduced the duration of intensive care needs in patients with ARDS. However, mortality rates and oxygen requirements did not change after NAC treatment (26).

Unfortunately, clinical studies on NAC use in real-life COVID-19 infections are far and few. Only one case series of 9 patients documents that intravenous NAC could reduce inflammatory markers in COVID-19 – whether this translated to better overall outcomes or faster recovery could not be determined (27). Several clinical trials examining NAC in COVID-19 have been planned -NCT04545008, NCT04419025, NCT04455243, and NCT04374461.

NAC is generally well tolerated orally, with most people experiencing mild adverse effects like nausea and vomiting. Its unpleasant smell that smells like sulfur is more of a deterrent than anything else. A small risk with intravenous formulations is allergic reactions, ranging from flushing, itching, swelling of the lips and throat to difficulty breathing and low blood pressure (23).

A significant problem with NAC is that the amount of active drugs available after being digested as a pill is very low, thus often requiring large amounts of medication ingestion. To complicate things, NAC pill metabolism is heavily dependent on liver and kidney functions. For example, NAC tends to accumulate in the body in those with damaged liver and/or kidneys. This is important, as it means these people may need less medication to achieve the same blood levels of active ingredient as healthy people (23).

This is a practitioner presentation to share with you the many uses of NAC that you might not currently be aware of.

FREE for Members of the Institute
SIGN IN AS ANINSTITUTE MEMBER*
PURCHASE VIDEO AS ANON-MEMBER
Not a member? Sign up to the Institute now.
*You must be signed in to the Institute Portal to watch the video for free. Not an Institute Member? Sign-up now to get complimentary access to this video and all our monthly deep dives and practitioner trainings.